Students were encouraged to create a 1-3 minute video for a chance to win amazing prizes, including an iPad, iPad mini, or Beats Headphones. We searched for the best original JCC student-produced video that answers the question: How has your writing improved while at JCC?

Prizes were awarded for 1st and 2nd place. JCC student Dawn Simone was our 1st Place Winner and received an Apple iPad.
2nd Place winner: Noe Duran.
Thank you to all of the students who entered the contest! 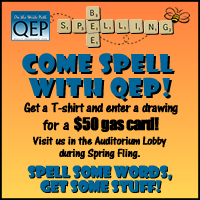 All faculty, staff and students were invited to enter the QEP Bee contest during the 2014 Spring Fling on campus. All participating contestants received free QEP Tshirts, and winners received $50 gas cards!

Our Back Door Writing Workshops
March, 2014

A series of workshops were offered to JCC faculty, staff, students and the Johnston County community featuring Novelist Marjorie Hudson, noted author of Accidental Birds of the Carolinas, and Searching for Virginia Dare.

Faculty, staff and students were invited to submit written entries for the Literary Competition. Cash prizes were awarded to winning entries. Grand prize was an Apple iPad. 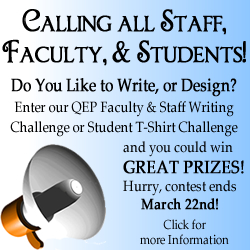 Faculty were invited to submit written essays describing ways that they incorporate writing assignments into their courses to facilitate achievement of student learning outcomes. Contest winner received an Apple iPad with retina display.

The Tart multi-purpose room was set up with displays from key support areas at the college including the Writing Institute, JOLT, the Writing Studio, the LRC, and the Literary Guild. A game center was set up with several games for students to participate in, and a sound stage featured a mini concert by our QEP video contest winner, Taylor Leopold.

Paragraph of the Week Contest 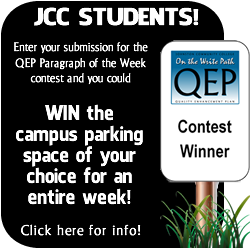 All JCC students were encouraged to submit corrected versions of paragraphs that were intentionally filled with spelling and grammatical errors for a chance to win a parking spot on campus of their choice for a week. The contest ran for 6 weeks.

On behalf of the QEP Marketing Team, we hope you have enjoyed the talent and creativity of our JCC students. These students definitely have a voice, and they are using it to spread awareness of JCC's QEP!

Thank you to all of the students who entered the contest!